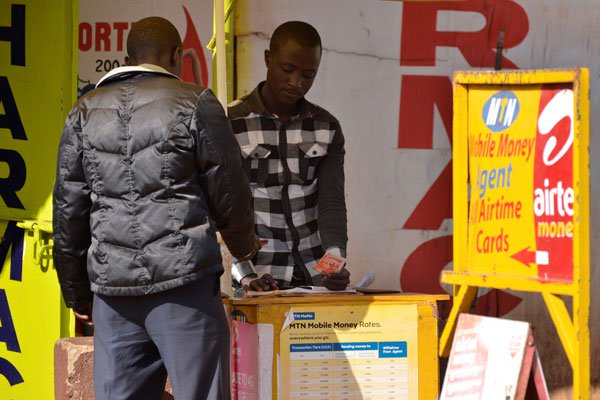 Mobile money dealers and customers yesterday expressed mixed feelings following a Friday Excise Duty (Amendment) (No.2) Act, 2018 gazettement.
Publishing the Act meant effecting mobile money transactions tax to 0.5 per cent as opposed to 1 per cent that was previously charged.
Ms Angel Nalubega, a mobile money dealer in Namuwongo, a Kampala suburb said despite reduction on mobile money tax, “customers are not transacting as was before the tax was introduced,”

“If a customer is to send Shs1 million to someone in town, s/he will rather use a boda boda than paying that tax,” Ms Nalubega said, adding, “My hope is that this tax is scrapped off altogether.”
For Ms Raina Salama there was a small improvement in transactions yesterday compared to previous week, but she was unable to attribute it to either tax reduction or “luck”
“Business is slowly coming back,” Ms Salama, a mobile money operator in Namuwongo said.

Mr George Were, a dealer in Kibuli, said there is a “slight increase in transaction” and he is hopeful that with increased awareness about the tax reduction, he will be in business.
“The reduction was just announced at the weekend and I think it is early to make assessment but there has been slight increase in transactions today [yesterday]. We hope it continues increasing,” Mr Were said.

The mobile money dealers association chairperson, Mr Norman Batuma, told this newspaper last evening that he had not acquainted himself with customers’ response to the tax reduction by press time but a few he had talked to reported an increase in transactions.
Parliament in October passed the Excise Duty (Amendment) (No.2) Act, 2018 despite resistance from Opposition MPs and a section of NRM legislators, who were defeated by government that insisted revenues from the tax were essential to finance the budget.

The MPs had put the tax at 1 per cent but Finance minister Matia Kasaija later told members of the civil society organisations that Cabinet had agreed on 0.5 per cent.
“I am not aware that Parliament has approved 1 per cent tax on mobile money. I apologise for that because it contradicts what we agreed on in Cabinet. What we agreed on was a half of one per cent,” Mr Kasaija said.
After the introduction of this tax, mobile money transactions plummeted from Shs866b to Shs475b and there were protests across country.
Government responded by reviewing it to 0.5 per cent charged on only mobile money withdrawals.

At the weekend, MTN, the biggest mobile money player, confirmed effecting the transaction to 0.5 per cent and Ms Elsa Muzzolini, the company’s mobile money general manager, hoped it would be affordable.
“We believe it [gazzeting the law] is going to bring back our customers because they will no longer have a big affordability issue,” Ms Muzzolini said.

Ms Judith Mirembe, who makes mobile money transactions on a weekly basis, continues to protest the tax, she described as “abrupt” and instead advised that government lowers it further because there are people receiving salaries through mobile money and such people will be greatly affected.
“I think government would have started with 0.1 per cent. It would be the best option,” Ms Mirembe said.